Spanish Association of Choir Conductors
Become a member! Contact with us Written by comunicacion on January 26, 2021. Posted in News. 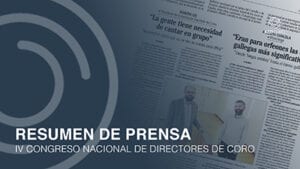 After 3 unsuccessful attempts, a month ago we held our IV National Congress for Choral Conductors. It was a different congress and we miss the closeness of being all together, but, nevertheless, it was very gratifying to have managed to bring together more than 30 congressmen and speakers during this weekend in a face-to-face congress based in Burgos and Vigo, and telematic too.
Below we share the press summary of this IV National Congress of Choir Directors:

Written by comunicacion on December 16, 2020. Posted in News.

AEDCORO is proud to present the programme for its IV National Conference for Choral Conductors and for the II “deCoro” Fair and Exhibition of choral music. After three postponements due to the COVID-19 pandemic, we have finally found a solution and a time that allows us to combine current regulations and the need for this essential meeting for the choral community of our country.

The Congress and the Fair will take place simultaneously in two venues: Vigo and Burgos, during the weekend of December 26 and 27, 2020. The choice of both venues allows us to hold a face-to-face congress in Vigo at the same time that we can hold an exhibition and the fair in Burgos. New technologies allow us to enjoy the activities that will take place in both venues at same time. For this reason is possible online registration for this event.

The original program has undergone several changes, but we believe that the new format will reach more people and will be attractive to our colleagues in the choral sector. All the security standards and protocols will be kept for safety reasons.

Written by comunicacion on November 24, 2020. Posted in News.

Throughout the pandemic that unfortunately continues to affect many people, we have been observing the constant mention of choirs as a source of contagion in various media. This causes us astonishment and indignation since we think that the aforementioned sources have had to look for a scapegoat to illustrate the contagion mechanisms of COVID-19 and, unfortunately, it has fallen to the choirs.

Choral conductors are fully aware that choral singing constitutes a risk activity due to the increased emission of droplets and aerosols when singing. This has been shown by several studies, many of them promoted by important choral organizations around the world, which also conclude that, with the use of the hygienic mask, FFP2 or similar, this production is reduced to levels analogous to a whisper.

The examples of contagion in choirs always refer to events carried out in the time before the spring confinement in which there was community transmission of the virus, but no protection measures were taken. The international choral community has made a huge effort to provide protocols and security measures to prevent these infections. Our country, once again, is at the bottom of Europe and the Government of Spain has not approved any protocol for rehearsals and choral performances, beyond the guides published by INAEM that only apply to a very specific type of choir. 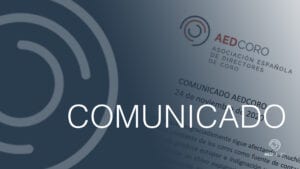 The Spanish Association of Choir Directors (AEDCORO) is made up of more of 120 directors and directors, all of them leaders of choral groups belonging to different cultural and educational sectors of our country. In recent months, the entire sector has made an effort of national cooperation and unprecedented international exchange of information and scientific studies, around the mandatory forms of prevention against COVID-19 in choral practice face-to-face, in order to continue the activity safely. In this sense, we want to highlight that some CCAA have approved protocols listening to professionals in the sector and collaborating with health experts. For this reason, there are numerous choral groups in our country that have taken up the face-to-face activity in recent weeks, following the aforementioned guidelines.

According to the European Choral Association-Europa Cantat (ECA-EC), 2.4% of the population in Spain (more than a million people) sings in a choir. February 19th of 2018, the Senate issued an institutional declaration recognizing the choral activity as a cultural asset of our society and the figure of the choral conductor as an indispensable element within it, showing his support for the initiatives that they pursue their encouragement. Likewise, numerous studies have shown the benefits for physical and mental health and well-being associated with the practice of collective singing, as well as its importance for the development of music education and social cohesion.

Unfortunately, for the last few months we have observed how the choral singing was news in several national and international media,showing this activity as supposedly potentiating a greater degree of transmission of COVID-19.

We want to emphasize that, currently, there is no scientific study that concludes that coral activity poses a greater risk of contagion than any other social activity, if prevention measures are adopted. Infections known and reported by the media in choral groups, occurred in the days before the governments confined the population, in a context of free circulation of the virus and without the adoption of security measures and distance.

Currently, there is no evidence of infections in choral rehearsals where prevention protocols have been established; neither in Spain, nor in any other European country.

Thus, with the horizon of the beginning of the school year in the month of September, we understand that there is no reason supported by the evidence scientific to restrict or cancel the choral activity face to face, or not to take the necessary measures that allow its optimal development both in educational and cultural environment. Otherwise will be in danger the job of many conductors, as well as other benefits related with choral singing.

For all these reasons, we call on the competent Administrations to: